Port Orleans French Quarter is our first stay at a Disney moderate level resort. Our first two trips have been at the value level, both in All Star Music. This year’s special of free dining enticed us to make the upgrade, and we are glad we did.

The resort has great dining options, a centrally located pool with bar, and the layout is very relaxing. Each building has that Louisiana antebellum architecture and the winding waterways make any walk around this resort a pleasure.

The Scat Cat’s Club bar inside offered fun live entertainment and good drinks. The gift shop was certainly an upgrade, and there were options to rent a boat or walk over the the Riverside portion of the Port Orleans resort.

The only downside to this resort we found was the frequency and reliability of buses. They would fill up fast and arrive less often than we remember from our ASM stays. Other than the long transportation wait times, this resort was great.

After our first Disney trip, we’ve learned to plan things out.

Starting on Day 1 we broke some of our pre-planned rules, but having our dining and Fastpasses preset made it much easier to make on-the-fly changes for other parts of the trip.

We came back this year because of Epcot’s International Food and Wine Festival. Last year was so enjoyable we brought a crew with us this year to share the experience.

After landing and checking in, we headed straight to Epcot. We had considered stopping by the Magic Kingdom first, but the lure of Food and Wine before our reservation at Garden Grill was too hard to pass up.

Our first time to dine at the Garden Grill did not disappoint. This rotating diner serves family-style food in the Land Pavilion at Epcot. During the meal the dining room rotates through the rainforest section of the Living with the Land ride and features character dining experiences. We met Mickey, Chip, and Dale. Interacting with them, especially Chip and Dale, was a lot of fun.

We started the day off in Animal Kingdom with breakfast at Tusker House. This buffet is a good way to start the day, especially when you have a large group. The selection is wide, making sure there is something for everyone. Pro tip: you can order Bloody Marys from the bar outside from your server inside. The one with bacon is the best.

The pre-breakfast group shot with Donald after his safari.

After a big breakfast with Mickey and gang, we decided to head out on the Kilimanjaro Safari where we encountered animals from across Africa.

The safari is a great ride, especially in the morning before it gets too busy and too hot.

We then headed over to Festival of the Lion King, a live performance inspired by the classic Disney film.

My son, Michael, was selected as part of the show.

The wildlife around the park was pretty incredible.

King Louie and Baloo hanging out in AK.

After a ride on Expedition Everest, we headed back to the resort to prepare for the Tomorrowland Dessert Party at Magic Kingdom.

While the firework show at MK is incredible, the dessert party wasn’t worth the extra spend in my opinion. The angle of the viewing was worse than almost anywhere on Main Street, and it was hard to hear the audio. The desserts were okay, but I’d not recommend this party for the spend.

We finally made it. Disney World is amazing, magical even, but nothing really kicks off a Disney vacation like Cinderella Castle crowning the end of Main Street USA in the morning.

Obligatory Liberty Square family photo. As you can see, the crowds were very low at MK.

The New Fantsyland expansion includes a character meeting with Gaston outside his tavern.

Gaston gave Michael plenty of advice on wooing women, working out, and being awesome.

Gaston’s training wasn’t enough to pull the sword from the stone.

But that didn’t stop us from taking a spin on the carousel.

We made a quick trip back to the resort to prepare for Mickey’s Not So Scary Halloween Party.

Chrystina, Kimberly, and Michael themed their costumes around Alice in Wonderland.

At the Crystal Palace they visited Winnie the Pooh and friends while enjoying a buffet with something for everyone.

Princess Tiana made quite the impression on Micheal. They discussed New Orleans, pecan pie, and made plans to exchange recipes next time they see each other. I think he has a new favorite Disney princess now.

And Cinderella Castle was lit for the occasion.

We started day 4 off at Epcot, ready for a full day of Food and Wine Festival. But first, we needed to grab some breakfast to fuel a day of small plates and big events.

Four days, four character dining experiences. We really packed them in this time, and they have been great. Since our dining plan was included as part of the vacation package special, we are taking advantage of it to its full potential.

The little prince was quite the gentlemen when he met Belle.

You can meet all the princesses at Akershus in Norway Pavilion at Epcot. It is also easier to get reservations here than Cinderella’s Royal Table in MK.

Even the adults like to meet their favorite princesses.

Snow White gave Michael a peck on the cheek, leaving him speechless.

Test Track is always a must ride when at Epcot.

World Showcase can be a great place to meet characters and enjoy the grounds.

The fountain in Italy Pavilion overlooks an open square that is a chill place to relax in between stops.

That night I took Chrystina out for a belated birthday dinner at Monsieur Paul in the France pavilion.

We had a great seat by the window overlooking Epcot and the lagoon.

The nicest part of the deluxe restaurants is the wine selection. Not many theme parks have this kind of dining experience.

After dinner we took a ride over to the Polynesian resort under false pretenses. Once we arrived the real motive was revealed. I had rented a pontoon boat and captain to take us out to watch the Magic Kingdom fireworks from the water.

This experience was amazing. We had champagne and strawberries delivered to the boat, and the captain took us out directly across from the Castle. The music and audio were broadcast and played over the boat’s radio while we sat back and enjoyed the show. I cannot recommend this enough for your special occasion at WDW.

The soldiers were out guarding Toy Story Midway Mania in Hollywood Studios. Thankfully they were also signing autographs.

The Studio Backlot Tour was closed for our last visit, so we were certain to ride it this time.

Flight of the Navigator

Speaking of Star Wars, Michael was able to attend the Jedi Training Academy.

This time he was able to fight Darth Vader and was victorious.

I loved this force push of 2 Stormtroopers after he defeated Vader.

The full video on YouTube of Michael’s Jedi Training II.

Chrystina was able to attend a drawing class with a Disney animator and meet Minnie Mouse in person.

It was a fun-filled day at Hollywood Studios. We finished up at Fantasmic, the nighttime show, and it was enjoyed by all. Happy Halloween!

Back at Epcot, enjoying another day at World Showcase for the festival.

The entrance to Epcot is a great place to get a memorable picture from a Photopass photographer.

I especially like this one of me, my wife Chrystina, son Michael, and sister Kimberly in front of Spaceship Earth.

Lunch at the Biergarten Restaurant in Germany Pavilion was one of Michael’s favorite meals.

In England Pavilion Mary Poppins was gracious enough to provide an autograph while telling Michael about a young man she used to babysit with the same name.

Chrystina was sure to peruse the shelves at Souk-Al-Magreb in the Morocco Pavilion.

I was guilty of looking at the scarves as well.

Michael found a Fez hat he needed all of the sudden, as well as other fun items to play with.

It was a great day at Epcot. The festival, world showcase, great meals, and low crowds made this a day our family will remember for a long time.

On the way out they caught a solo shot of me with Spaceship Earth in the background. I couldn’t help but include this shot, it is the best place I’ve visited.

It’s the last day in the parks for this trip, we head home on a flight that leaves in the afternoon. After we got our bags all checked and travel arrangements via the Magical Express bus service to the airport, we headed to Hollywood Studios where we were greeted with some rain.

My sister Kimberly was chosen as a participant in the Indiana Jones Stunt Show. I recommend watching this show during hot, busy, or in our case, rainy times of the day.

Goodbye, for now, Disney World. We’ll be back! 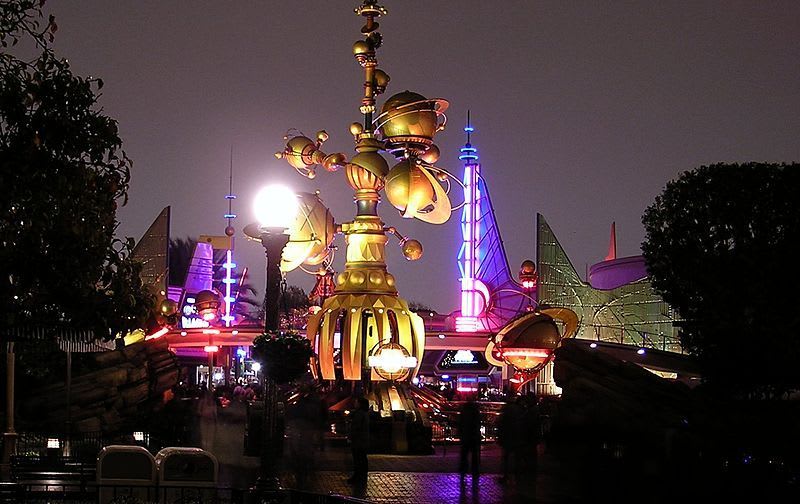 While aimed at general audiences, the picture certainly rewards Disney lovers with countless easter eggs and references to all things Disney. 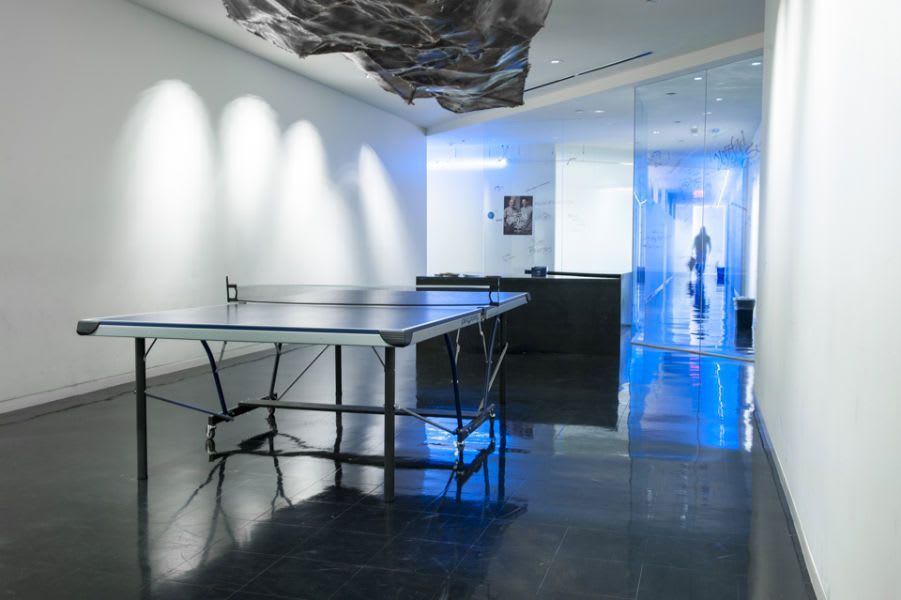 This past weekend I was fortunate enough to participate in the 3 Day Startup San Antonio event at Geekdom as a mentor. If you are not familiar with 3 Day Startup (3DS), the